Karl-Eduard von Schnitzler (1918–2001) was the chief commentator for GDR television [Deutscher Fernsehfunk] and presided over one of its best-known programs, the so-called “Schwarzer Kanal” or “Black Channel.”  The show ran weekly from 1960 to October 30, 1989, with Schnitzler offering twenty minutes of commentary on excerpts from the so-called West Television. In the GDR, “a Schnitz” was the amount of time it took viewers to switch to another channel as soon as they heard Schnitzler come on air.

The following photo shows Schnitzler in 1985, the year in which the GDR and the FRG commemorated May 8th, the fortieth anniversary of the end of World War II. On February 2, 1985, four months in advance of the anniversary, Schnitzler hosted an episode of “Der schwarze Kanal” entitled “Day of Mourning or Celebration?” A partial transcription (in English translation) of the program follows underneath the photograph. A link to a video clip of a portion of the program is included below under Further Reading, as is a link to a facsimile of the entire script.

The February 2, 1985, program followed the typical format, with segments from West German television (in this case, footage from the program Bild und Ton: BRD-Fernsehen) interspersed with Schnitzler’s sharply critical commentary. Although Schnitzler made clear that former West German Federal Chancellor Konrad Adenauer was by no means a National Socialist, he criticized Adenauer for appointing so many former Nazis to cabinet positions and other positions of power in the early Federal Republic, thus ensuring a troubling degree of continuity between the National Socialist and postwar West German elites. He also suggested that the GDR had been more successful than the FRG in identifying and rooting out one long-downplayed cause of the war: armaments and other profiteers. 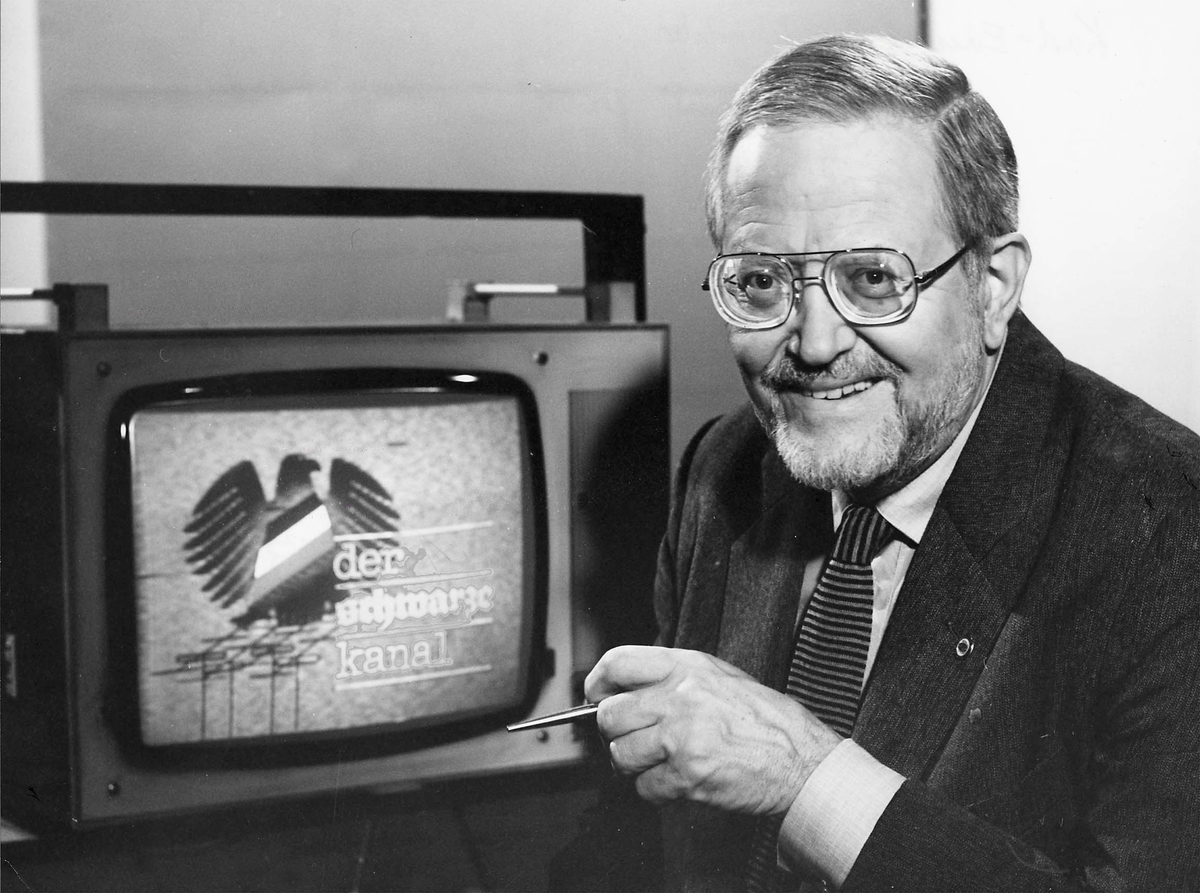 Schnitzler: Just so there is no misunderstanding, dear viewers: Without a doubt, Konrad Adenauer was not a Nazi. He may have continued to draw his pension from them; apart from a brief imprisonment, he was able to live unbothered in Rhöndorf—with the magnificent view of the Rhine Valley at the foot of the Siebengebirge and across, over the Godesburg, to the Eifel (for others, such views were blocked by prison bars and steel doors); but he was not a Nazi. Whatever compelled him to appoint Dr. Hans Maria Globke as his most important state secretary and to make him his confidant, the most influential man in the state? Globke, who worked on the Nuremberg Race Laws in the Prussian Ministry of the Interior, commented on them, and invented the defamatory Jewish star? This man shaped the Bonn state. Hitler's generals were able to build up and lead the Bundeswehr; Hitler's judges in turn dispensed “justice” (or what they considered to be law); half a dozen criminals convicted for crimes against humanity became federal ministers; officials in Heinrich Himmler’s Reich Ministry of the Interior became civil servants in Bonn; Hitler’s teachers taught children in school; and Goebbels’ journalists shaped public opinion. No, for them and the like, of course, May 8 was “Capitulation Day.” After all, they had lost, so they had reason to mourn.

But forty years have passed since then. How do those who were still children or young people back then think? The unburdened, the politically innocent?

Kohl: [ . . . ] First of all, we have to answer the question: why the fortieth anniversary? It is a surprising question that comes up again and again. I think it is very important that we stay with it for a second. The difference from the twentieth anniversary is that the twentieth was in 1965, and four-fifths of the people living at that time still had personal memories of the collapse, of Nazi barbarism, of the war, and all the misery. Today, two-thirds [of the people] have no personal memory at all. So, first of all, I think it is not a day of celebration at all.

[ . . . ] First observation: Adolf Hitler started the Second World War. With his regime, he brought terrible things upon the people in the name of Germany. Auschwitz, Treblinka, and Dachau and everything leading up to it stand for the suffering and misery of millions of people, and that cannot be erased from our history. We are the main culprits, about that there is no ... We as Germans, as the German people, must bear the full burden of history for the Second World War.

Hitler's successor, Grand Admiral Dönitz, was without any sort of power base. The Allies were in charge. They then simply had him arrested.

Schnitzler: Everything that has just been said here corresponds to what is taught in school in the Federal Republic and to the presentation of history there. As regards historical fact—apart from Hitler’s crimes—none of it is tenable.

Grand Admiral Dönitz, whom Hitler had appointed as his successor as Führer and Reich Chancellor before his suicide, had not “simply been arrested by the Allies”: he had been allowed to form a “Reich government” under British protection in Flensburg—without Hitler, but with some Nazi ministers, even—and only persistent Soviet warnings and demands put an end to the Flensburg specter.

And the so-called “Hitler-Stalin Pact”? It was a non-aggression pact, offered to the Soviet Union by Germany—nothing more. A non-aggression pact, just like the one Poland concluded with Germany in 1934 and the one England and France signed in 1938 [i.e. the Munich Agreement]. The Second World War broke out not because of this pact, but because the Western powers persistently refused to conclude an honest alliance with the Soviet Union against those threatening Europe.

And as for the war guilt: Did our people want the war? Certainly not. We bear responsibility for the fact that so many let themselves be manipulated for Hitler, for mastery over mankind [Herrenmenschentum], and for the “push to the East” [Drang nach dem Osten]. But who manipulated, who let people be manipulated? The armaments- and war-profiteers wanted “living space” [Lebensraum], that is foreign countries, foreign wealth, foreign raw materials, foreign markets. These true culprits are not mentioned in connection with May 8th. Nothing is said about the fact that the enemy always stood in one’s own country! And who always recognized this enemy and fought him—and who today holds power in their own state, in the first German state of peace?