Moritz Jastrowitz, “The Roentgen Experiments with Cathode Rays and their Diagnostic Application” (1896)

This article describes the discovery of X-rays by Wilhelm C. Röntgen (1845-1923) and outlines their practical application in medicine, using an X-ray of a human hand as an example. The article discusses Röntgen’s attempts to transmit X-rays through various substances and concludes with a description of the general physical characteristics of X-rays.

Gentlemen! Among the abundance of demonstrations and lectures on offer today, I would especially like to call your attention to a discovery that was presented the day before yesterday at the Physics Society. This also appears to be significant for medicine. […] The scientist who made this discovery is Professor Roentgen in Würzburg.

I will first begin with a brief demonstration. In this photograph, you see the bony structure of a human hand, metacarpals along with phalanges. On closer inspection, you see fine, light contours that outline the bones of the fingers and follow the contours of the soft tissue. One finger bears a ring, which appears darker than the finger bones. The ring hovers over the bones of the relevant phalange like the ring around Saturn. (Fig. 1) If I told you that these bones were not photographs of a skeleton, but rather of a living person, it would sound almost like a joke or a fairy tale. However, the photo was in fact taken from a live subject, and I would like to give you some information on how this is possible, making reference here to a provisional report by Professor Roentgen, which appeared in the Proceedings of the Physical Medicine Society of Würzburg in December 1895. 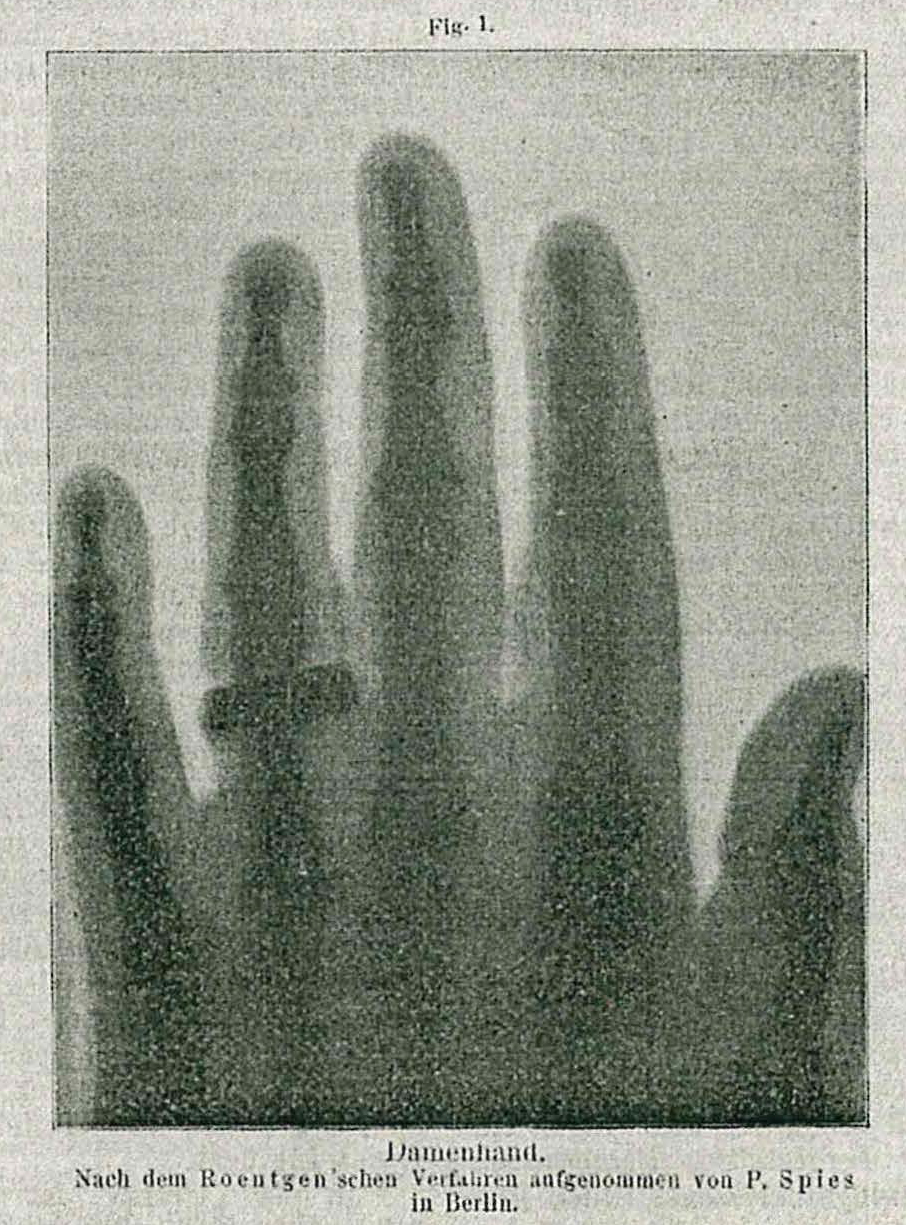 It made sense to investigate the nature of this light-related phenomenon and to determine whether the light could penetrate different kinds of substances. Since the light passed through dark cardboard, the question arose as to whether it could pass through other materials. Consequently, Roentgen tested various materials. He reports that these rays even passed through a thousand-page book (as revealed via fluorescein on the test plate) and through several layers of centimeters-thick gutta-percha. The rays also went through fir planks up to 3 cm thick. Experiments with metals showed the limits of the light’s ability to penetrate substances, for the thicker the mass to be penetrated, the less easily it passed through. The light only passed through a metal plate if it was thin enough and was significantly weakened in the process. Yet no substance was completely impenetrable.

Roentgen then continued to test the effects and the nature of the rays, initially on the chemical side. To his satisfaction, he discovered that the rays were quite suitable for producing photographs, which made the discovery very suitable for testing in various ways and made it more valuable. To produce photographs, he needed no lens apparatus whatsoever. It was enough to put a photographically sensitive plate into a box and expose the object to be photographed to the new rays. A photograph through wood was produced on the plate in the enclosure. Since denser bodies allow fewer rays to pass through, they appear as light figures on negatives and as dark objects on the developed photograph. Thus, it is understandable that, when the hand is photographed, the fluorescent rays pass through the soft tissue, whereas the bones and the ring on the hand are captured more definitively, these of course being much denser.

As for the nature of the new ray, termed X-ray by Roentgen, it is totally unique, different from all rays known until now. The X-ray does not obey the laws of refraction. It also has no reflection. It passes unrefracted through every prism and is not even deflected. Roentgen let the rays pass through various fine metal dusts – through zinc dust, through fine silver dust, and through finely ground rock salt. There was neither reflection nor dispersion. Although the X-ray emanates from the light of cathodes in airless glass tubes, it is not deflected by the magnet like the cathode rays themselves. It distinguishes itself in this way from the latter, as it does from ultraviolet rays, which we know to have very strong refractivity.

This development is of obvious importance for medicine. Surgery, in any case, will benefit from photographing the bones of the living. Fractures, dislocations, distensions, and foreign bodies will be easy to recognize. (Here I would direct your attention to the sharp outlines of the brighter finger joints in the photogram.) We will be able see into joints. It is also possible that we will be able to recognize certain changes in the interior of the body, in the body cavities, if the rays pass through their surfaces: perhaps denser tumors that are less permeable to X-rays, for example, fecal stasis in the case of intestinal obstruction, so that the location of the obstruction becomes clearly visible.