Was the willingness of individual West German citizens and politicians, as well as the German government, to respond to the humanitarian catastrophe in Southeast Asian waters in the 1970-1980s by accepting refugees an early example of the country's “welcome culture”?
In December 1978, the first “Boat People” from Vietnam were welcomed in Hanover by the Red Cross. They were Germany's first “contingent refugees” and thus ushered in a new period in the history of asylum policy in West Germany.  “Contingent refugees” were granted immediate residence permits without having to go through a lengthy asylum procedure.
Over 40,000 “Boat People” - so called because they sought to escape persecution and oppression in Vietnam by sea - found a new home in West Germany. As a result of the Vietnam War, the Vietnamese government intensified repression and persecution of minorities and political opponents starting in 1975. Particularly affected was the Chinese minority (“Hoa”), who were systematically persecuted and expelled by the government in the course of the escalating conflict with China. As a result, hundreds of thousands of people fled Vietnam, often across the open South China Sea toward Malaysia, Indonesia, and Thailand, where they were housed on dilapidated freighters or in overcrowded camps. UNHCR estimates that at least 200,000 to 400,000 people died while fleeing.
In view of this dramatic situation, a broad relief movement developed in the Federal Republic. The Prime Minister of Lower Saxony, Ernst Albrecht, decided to take in the first 1,000 refugees in Lower Saxony.
The suffering of the “Boat People” prompted not only German government agencies to help: in 1979, for example, Rupert and Christel Neudeck, together with prominent supporters such as Heinrich Böll, chartered the freighter “Cap Anamur” to provide immediate help for refugees. Forty years later, people are still drowning at sea: since 2014 alone, between 15,000 and 20,000 people have lost their lives fleeing across the Mediterranean. 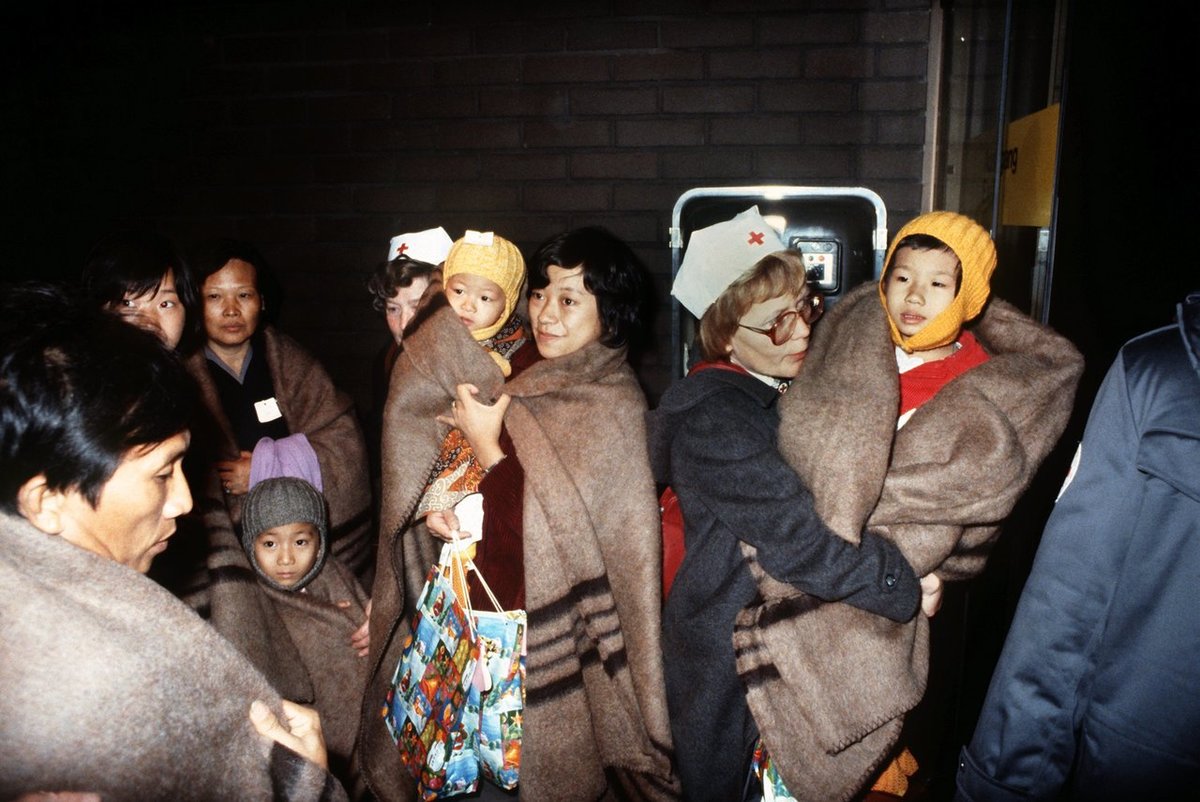 Refugees from Vietnam Arrive in Hannover (December 1978), published in: German History Intersections, <https://germanhistory-intersections.org/en/migration/ghis:image-169> [September 27, 2022].
< Displaced Persons from a camp at Wiesbaden before their departure (1945)
The Amadeu Antonio Foundation >