A Spatial Condemnation of the Treaty of Versailles: German Women’s Committee against the Guilt Lie (1919–1933)

The “German Women’s Committee against the Guilt Lie” was founded in 1921; it represented fifty-one different women’s associations. The committee received grants from the German Foreign Office to publish writings opposing the Treaty of Versailles and its War Guilt Clause (Article 231). It is not entirely clear when this Women’s Committee poster was in circulation. The holding institution, the German Federal Archive, dates the poster from 1919 to 1931 but also mentions it specifically in the context of a 1931 letter to Reich Chancellor Bernhard von Bülow. The poster presents Germany as a victim both visually and linguistically. Germany in its prewar borders is ensnared in the “murderous web” of the Versailles Treaty, taken hold of by vermin. The occupation of the Ruhr is described as a “rape,” i.e., an unlawful violation.

The full text of the poster reads: German women! Have you already forgotten the true source of your growing misery, of your cruel impoverishment? It is the peace dictate of Versailles! It’s the rape of the Ruhr, which makes a mockery of all law.

Versailles has robbed you of: Grain for bread—Potatoes—Sugar —Butter—Milk—Coal [with two graphics illustrating the coal supply before and after the “strangulation” of the Ruhr].

How can we escape from this murderous web? Not by quarreling and striking. France is lying in wait for a German fratricidal struggle—only unity and a readiness to work, helpfulness, and tenacious resistance to foreign violence, unshakable faith in Germany’s rights and future will bring liberation to you and your children! German sisters! The path is difficult! Do not tire!

We want to work together tirelessly, stitch by stitch, to loosen the grip of the web of Versailles! 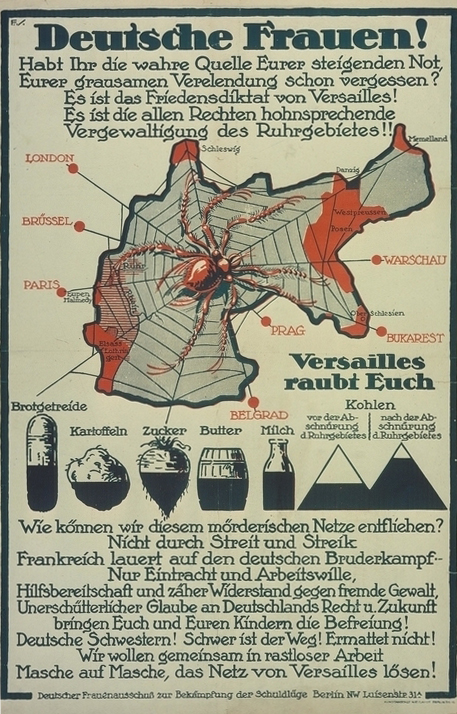 Source: “German women! Have you already forgotten the true source of your growing misery, of your cruel impoverishment?” Berlin: Weyland, c. 1919/33. Bundesarchiv-Bildarchiv, Plak 002-008-025.