Carnival Parade in the Bavarian Town of Schwabach: Staging Expropriation (1936)

Starting in 1933, clubs or school classes used carnival processions as opportunities to stage the expulsion, expropriation, and disenfranchisement of Jewish Germans. This float, which was part of Schwabach’s 1936 Carnival Parade, bore the derisively euphemistic name “Firmenwechsel” (Change of Company) and celebrated the fact that two of the town’s Jewish businessmen, Moritz Rosenstein and David Bleicher, had been dispossessed the previous year. The menswear, woolens, and accessories store owned by David Bleicher had been forcibly shuttered on May 31, 1935; likewise, the fashion, linens, and ready-to-wear clothing store owned by Moritz Rosenstein and his son-in-law Justin Gerstle had been forced to close a few months later on August 18, 1935. The inscription “David Bleichstein” conflated the names of the two businessmen, thus implying a uniform Jewish identity. This purported uniformity was undercut, however, by the male figure’s clothing, which was strongly suggestive of an Eastern Jew [Ostjude], or poor retailer, rather than a member of the German economic bourgeoisie. Such staged performances of persecution were understood by members of the majority society as opportunities to emerge, in their own right, as “artists-soldiers” who fused art with war (see “In Search of a Führer – Fusing Art and War”). 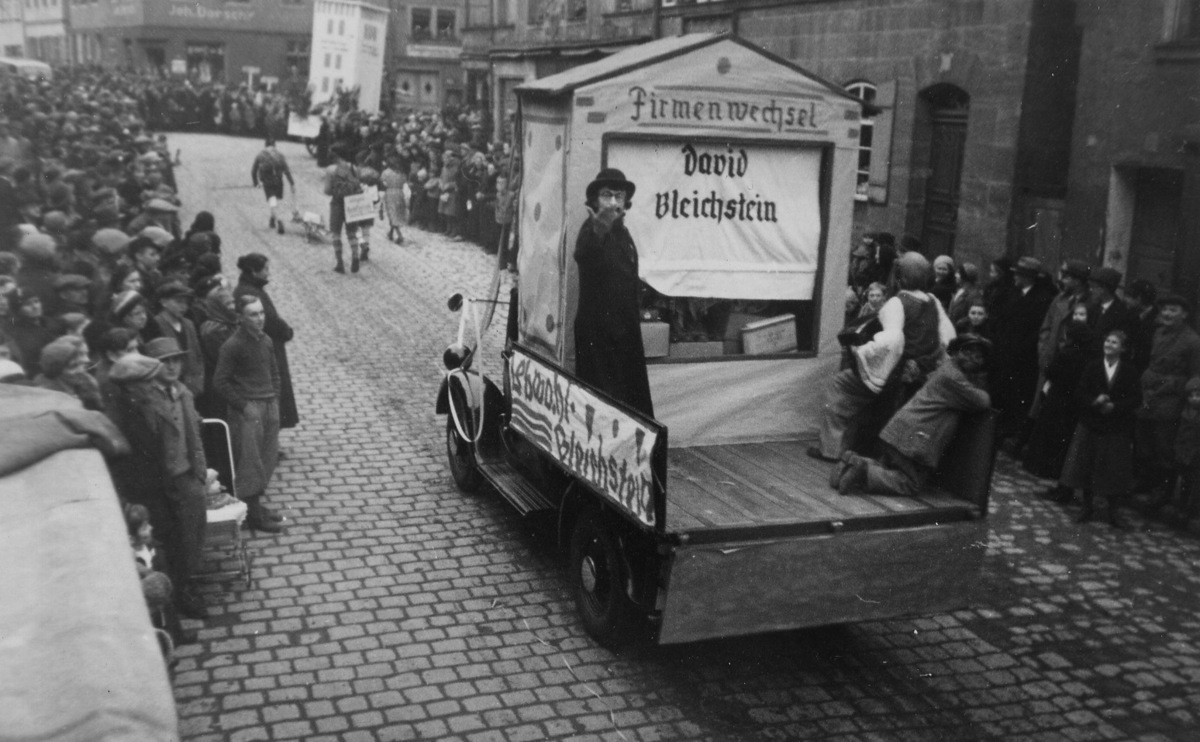 Alon Confino, A World without Jews. The Nazi Imagination from Persecution to Genocide. New Haven and London: Yale University Press, 2014.

Carnival Parade in the Bavarian Town of Schwabach: Staging Expropriation (1936), published in: German History Intersections, <https://germanhistory-intersections.org/en/germanness/ghis:image-69> [September 20, 2021].
Julius Meyer: A Jewish German Compares his Experiences as a German Soldier in the First World War and as a Jew in the November Pogrom of 1938 (Retrospective Account) >