Brickmakers from Lippe as Seasonal Migrants in the 19th Century

In the principality of Lippe, migrant labor was already widespread in the seventeenth century. Many men went to Friesland and Holland in the summer, where they worked as grass cutters or peat cutters. Since the end of the seventeenth century, they specialized brickmaking, and in 1865 almost 10,000 Lippe men worked as brickmakers. Until the end of the nineteenth century, they dominated the brickworks trade in the northwest of Germany, the Netherlands and Denmark. The following excerpt from the memoirs of Friedrich Mahlmann (1858-1947), a master brickmaker from Lippe, gives an impression of the life of these seasonal workers.

We were confirmed on November 17, 1872. Then in the winter came the master brick maker Fritz Lutter from Sabbenhausen, a cousin of my father’s. The two of them drew up a contract according to which my brother Christian and I were to accompany him to the brickworks in Kleinenhof near Esterbrügge in the Altenlande. We took a ham and a few sausages with us from the pig we had slaughtered; the rest was to be sold when we got there. We began our journey on April 6. Oh, the first farewell was hard, but necessary. I felt, as Fritz Wienke later wrote, “Please allow me another glimpse of Schleswig there to the south!” The departure and journey were made easier because most of the workers, including three fourteen- to fifteen-year-old boys, who were going along to the brickworks, came from Sabbenhausen, Ratsiek, and Wörderfeld. At the time, it was already possible to travel by railroad, but Lügde did not yet have a station. Therefore, we had to cover the first part of the journey, the nine kilometers to Pyrmont, on foot.

At the brickworks, I first had to learn how to remove the fresh bricks from the molding table. Each time that the molder formed a brick, I stepped on a lever; the board with the brick rose, making a “clink, clink” sound, then I reached for the brick and carried it to the wooden frame that we called a Ruste, ten layers high. This had to go quickly, though, because when the molder had formed the next brick I had to step on the lever again and grab it. Thus, I had to run back and forth about seven thousand times a day. Then I had to take particular care that the bricks did not rest crooked on the frame, and because it was quite light, the molder said: “I’ll have to teach you first where to set ’em down.” And I quickly learned from him. He was a good man all around.

We were 24 men at the brick works. The master was strict. He seems to have been satisfied with our work, but he expected us to improve and produce more and more, as they were building at quite a pace in Hamburg in those days. But we worked as long as daylight allowed, from the early morning until nine in the evening. The long and hard work left no time for homesickness, but it came on Sundays when I was alone and thought of my school chums back home.

The working season ended on October 14. My hourly wage had been eleven pfennigs, and now I received 90 talers for the period of 27 weeks. After subtracting my cash outlays, municipal contributions, and travel expenses I could still present my parents with 45 talers. The joy of reunion brought tears to their eyes and mine. 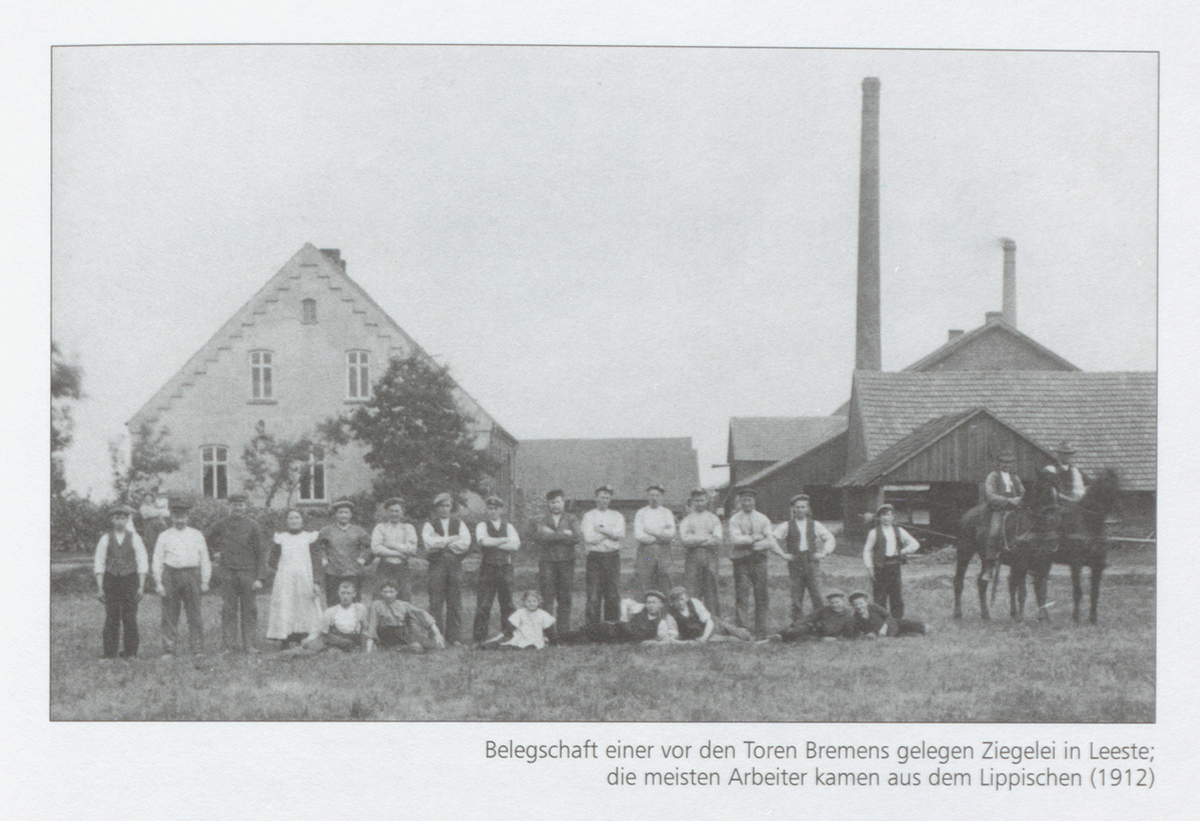 Brickmakers from Lippe as Seasonal Migrants in the 19th Century, published in: German History Intersections, <https://germanhistory-intersections.org/en/migration/ghis:document-52> [September 20, 2021].
< Itinerant Laborers from Lengerich in Holland (1802)
Franz Rehbein, “Among the Seasonal Migrants to Saxony” (1911) >