Franz Rehbein, “Among the Seasonal Migrants to Saxony” (1911)

Franz Rehbein (1867-1909) came from a poor background and had to contribute to the family's livelihood early on as a seasonal worker going to the region of Saxony (“Sachsengänger”). After he lost an arm in an accident and was no longer able to work in agriculture, he became actively involved in social democratic politics. He wrote about the lives of farm workers and worked for the social democratic newspaper Vorwärts, among others. This text excerpt is from his autobiography, which was published two years after his death.

Around Easter, shortly after I left school, an agent from Köslin [district in East Prussia, now in Poland] traveled around the area to recruit “agricultural workers for Saxony.”

He needed all kinds of people: men and women, girls and boys. A few years before, he had already recruited whole contingents of farmworkers from both the city and the surrounding villages along with a certain village reaper named Höhnke. They were contracted to work from spring to late autumn in the sugar refineries in the Magdeburg and Braunschweig region or on various estates in Hanover, Oldenburg, and Schleswig-Holstein. Most of these workers returned home by winter.

The agent was an expert at making people’s mouths water. According to his descriptions, “Saxony” was a veritable promised land flowing with milk and honey. He had it relatively easy with his fulsome accounts, since many of those who had already been “sent off” before allowed themselves to be recruited again, and also had many good things to tell the greenhorns about beautiful “Saxony.” The workers were treated better than on the Pomeranian estates, the food was tastier and above all the wages were incomparably higher. Even those who had not been best pleased conceded this last point.

The agent managed to use this circumstance to excellent advantage. “Children,” he said, in a tone of conviction, “the 8 or 9 months don’t last forever; if you don’t like it there, you can come back in the autumn; your journey is paid after all.” He added that the batch he needed now was only for replenishment, since he had already hired several hundred in January and February, and by early March sent them to various regions of Saxony: Anyone who wanted to go along should make up his or her mind by the next weekly market, for the transport would leave then.

I too had heard the man talking like this in the yard of the tavern where he was lodging and had to admit that his words literally electrified me. At home I discussed it with my mother. She had also already considered it, she said, but had dismissed the idea in the hope that we could find something else suitable for me. I was finally able to allay her misgivings. I pointed to other people who had also gone off early in life and who wrote fine letters home, and also reminded her of the remark by a teacher that one must have seen something of the “world” if one wished to participate, and tallied up the fine sums I would earn “out there in Saxony.” I see my mother before me, taking a deep breath and saying, “Well go on then, it is the destiny of us poor folks to have to push our children out into the world if only they can lift their fingers.”

Yes, that is how it was. For many years it had always been like that, that the children of poor folks, as soon as they had left school, had to look after themselves: the wind blew them wherever it pleased. And strange or not, most of them liked it better away than at home.

Scarcely had I obtained my mother’s permission to travel, I sought out the agent in order to register myself as a migrant to Saxony. At first he acted as if I was “awfully small” and also harbored some doubts because I was so very young. He didn’t like to take boys under sixteen, he said, for on the one hand the employers in Saxony usually expressly demanded this minimum age for servant boys, but he could also get into trouble with the police if he placed children who were only just fourteen. At this point the village reaper Höhnke jumped in. “I could use the kid,“ he said, “he can be an ox-boy at the sugar refinery, they don’t look too closely there.“ At the same time he pulled out a contract form and asked me to sign it. “No need to read it beforehand, Son,” he said, “at the factory you’ll get 6 groschen a day, and if you’re clever they won’t deduct the fare from your wages.”

I gladly accepted this summary explanation; all I was interested in were the 60 pennies wages a day. What good fortune! As a fourteen-year-old boy in Saxony I would earn as much as a full-grown day laborer back home in Farther Pomerania! What did I need to know of all the other matters covered in the long contract? It sufficed that I had been accepted as an ox-boy at the W. sugar refinery in Schleswig-Holstein, and I signed. The transport was set to depart just four days later.

At three-thirty in the morning we had all assembled at the railroad station; the recruits from the surrounding villages had already arrived the previous evening with bag and baggage. We were 45 persons in all: men, women, boys and girls; I appeared to be the youngest.

What a sight we were at the station! Each one with their pack or bundle before them; here a chest, there a basket, a sack or only a piece of sacking in which they had bound their belongings. And yet, not one of the varied faces showed any emotion let alone sadness. Only my mother, who had accompanied me to the station, could not suppress a certain uneasiness. Despite the early hour some of the men were even merry and playful; they sang and toasted each other with their bottles of booze. And so we passed the time waiting for the train that would take us away.

Why did these men and women, boys and girls flee their homeland? Why did they shake the dust of Pomerania so lightheartedly from their shoes? An old day laborer provided the answer when he called to me encouragingly, “Keep your chin up, little fella, we can’t be worse off anywhere in the world than here!” A brief, heartfelt farewell, then the train steamed off with us. I had no inkling that it would be twenty long years before I saw my homeland again.

Seasonal Migrants to Saxony in Transit in Berlin (1907) 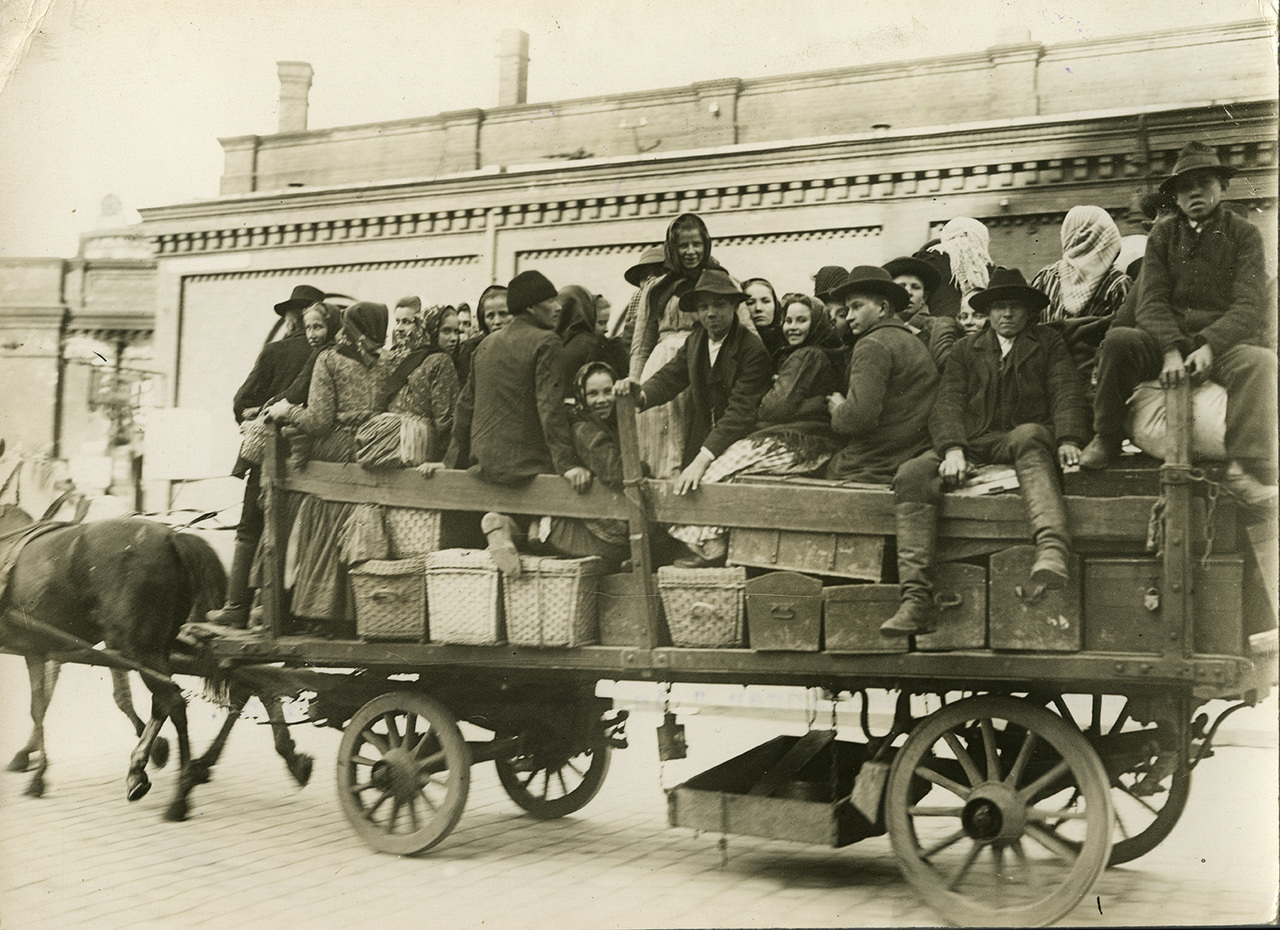