Since the seventeenth century, children aged six to fourteen years who came from poor families with many children had to seasonally migrate from the Alpine region to Upper Swabia, where they worked in agriculture during the summer and thus supported their families. In this excerpt from her memoirs, the former “Schwabenkind” Regina Lampert from the Austrian Vorarlberg region recalls her time as a seasonal worker. Regina’s family was poor with many children, and every year at least one of the siblings had to work in Upper Swabia during the summer. In 1864, Regina had to make her first long journey as a ten-year-old.

After this particular summer, my parents often discussed which of us children would have to travel to Swabia next spring to work as herders. We often listened in secretly. Mother said, “I don’t want to send Regina, the head of the village has been asking for a long time whether Regina would look after his two cows, which he can’t take to the alpine pasture over the summer.” Father said: only Anton will be sent to Swabia, the three older brothers Jakob, Baptist and Andreas[1] want to go to Switzerland this spring to train as masons. Soon Tone [Anton] and I had forgotten what our parents had discussed.

In early March, during religion class at school, the priest[2] asked the children who were going to Swabia as herders to raise their hands; I looked over at Anton on the boys’ side; he signaled to tell me to raise my hand; much to his joy I followed, since he was always begging: “come along with me to Swabia, so we can spend every Sunday together.” The priest counted the children and said, “There are eleven of you, six children have to take their First Communion and five have to make their First Confession. Then we had to do an extra hour of religion class every day. After school we always ran home, my brother taking the lead. Mother was just standing on the stairs: “Mother, Mother, the priest asked who is going to Swabia. Both of us raised our hands.” “You as well, Regina?” “Yes, Mother, Tone was begging me so to go, too.” I saw the tears in Mother’s eyes. She could not speak, went into the house to the kitchen and brought us coffee [and] bread. From then on Mother was always sad, it hurt her to send us away. At supper Father said, “Regina is too young, if I don’t find a place for her I’ll just bring her back home.”

Finally the day of our departure approached; we had to go to confession and Holy Communion, I only to confession. We had to leave on March 17th, two days before the feast of St. Joseph, at four in the morning; we were to set off on our journey at 6 o’clock. Breakfast was quite silent, we were each thinking our own thoughts, and mother had baked us a farewell cake, which seemed wonderful to us. During the meal we were admonished to be well behaved, obedient and industrious: in the morning and evening we should pray to our dear Savior and the Mother of God. Mother especially urged me to think straight away of the Mother of God if anything bad happened to me and to implore her for aid and protection. Our grandparents, or as we called them Ahna and Ähne[3] also stood up, bid us goodbye and said a few kind words to us. Then it was time to bid farewell to all our loved ones, mother, sisters and Ahna und Ähne, our grandparents. We valiantly held back our tears. “Farewell, godspeed, and good luck and blessings!” Then we all said the Our Father together and off we went.

It was quite cold and had snowed heavily overnight, everything was white when we left the house and walked up to the village. A wagon with two horses waited outside the rectory, more children had arrived from Düns and Schnifnberg;[4] fifteen children in all took their places on the wagon. When we had all sat down, the priest approached the wagon and bid us farewell, wished us luck and blessings, spoke a few words of comfort – with the promise to include us in the Mass and pray that we would remain healthy and well behaved and find good positions.

In Friedrichshafen a few farmers were waiting for boys who had already worked for them for a summer or two. They were all happy to find each other in good cheer and health; nearly half the children entrusted to Father already have places. Twelve remain, including the two of us. We ate a little something and then we went along with Father who bought us train tickets to Ravensburg.[5] There we had to spend the night again at an inn. We were given soup and potato pancakes for supper. Afterwards we went to bed on straw sacks and wool blankets. Quite moved and weeping, Father said, “Now children, let us pray that the dear Lord and the Mother of God protect you and that you find good places and good farmers tomorrow.” After praying and saying good night we quickly fell asleep and slept until Father woke us. We dressed quickly. Each of us still had some provisions, which we ate. Then off we went to the so-called children’s or herders’ market.

At the market we saw a hall, with a large plaque reading “Market hall for child herders and servants.” We went inside. The hall had benches all around with a well-heated stove in the middle and next to it a long table with more benches, at which we sat. There were more boys and girls and also farmers and a farm woman. The place was rather full. The big boys who had traveled with us and two girls were able to negotiate with the farmers themselves; they were offered wages for the whole summer according to their size and strength. Today is the feast of St. Joseph, the farmers said; they paid between 10 and 20 or 25 gulden up to St. Martin’s Day and offered everything double, that is, each girl or boy would receive two sets of clothing from head to toe. This was part of their summer pay, two pairs of shoes, two pairs of stockings or socks, two shirts, one workday suit and a Sunday suit, a hat for Sundays and a cap for workdays, that is, Sunday and workday clothes. In less than an hour everything had been settled. My brother went to a teacher in Ailingen, an hour and a half from Friedrichshafen. The teacher has a bit of land there and his wife. Father wrote everything down; the boy was to receive ten gulden and two of everything and to seal the agreement one gulden as a pledge, which Father received in cash.

I had some hopes of returning home with Father. Then a farmer came, almost too well dressed for a farmer. He said to Father “What about this little girl, are you looking for a place for her?”: “Yes,” Father replied, “I fear she is still a bit too young.” The man asked “Do you want to come with me? I could use you to look after the geese, 50 to 70 of them, also for errands, collecting fruit and various small jobs. I live in Berg near Friedrichshafen, one hour from Ailingen. You could visit your brother there on Sundays and he could visit you.” That made sense to me, Father reached an agreement with the man and also got 10 gulden as a pledge. And so it was settled. Father looked at me the whole time he was negotiating and could scarcely hold back his tears. 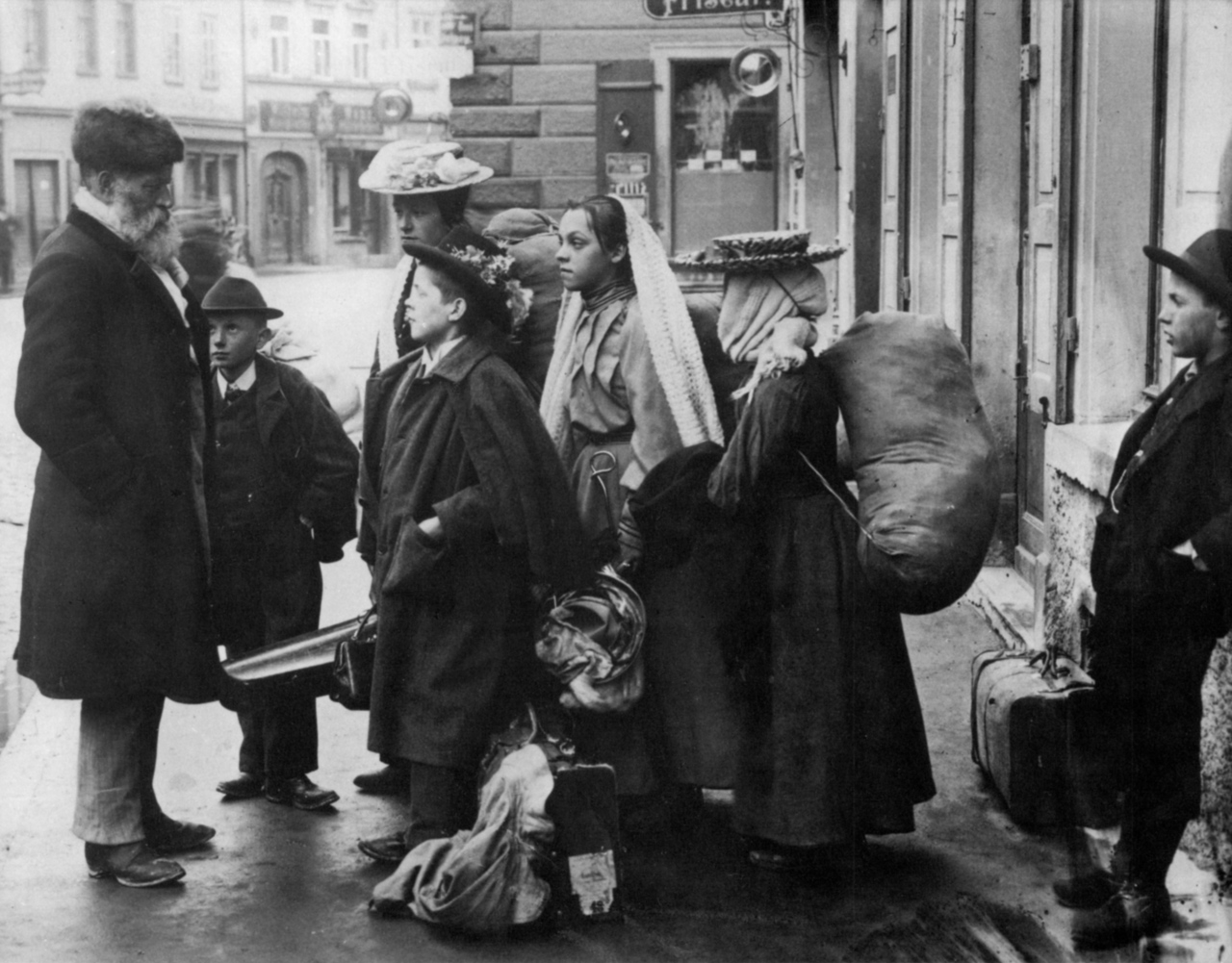 Regina Lampert, A Child Migrant in Swabia. Memoirs of a Young Girl from Vorarlberg, 1864-1874 (1996), published in: German History Intersections, <https://germanhistory-intersections.org/en/migration/ghis:document-56> [September 20, 2021].
< Glückel of Hameln Writes about the Wedding of her Eldest Daughter (Late 17th Century)
Excerpts from a Report by the Social Welfare Administration in Hamburg (May 18, 1951) >