Speech by Reich Chancellor Adolf Hitler before the Reichstag (October 6, 1939)

In contrast to Hitler's secret speech of August 23, 1939, in this speech before the Reichstag (parliament), which is reproduced here in excerpts, he exercises the greatest restraint with regard to the true intentions of the Nazi war of conquest in Eastern Europe. Thus he denies plans for further conquests and mentions the goal of “order and settlement of the Jewish problem” only in passing. Shortly after the rapid victory over the Polish army, a good portion of the speech consists of boasts about the achievements of the German Wehrmacht and Hitler himself in this process. Also conspicuous is the attempt to justify the sudden alliance with the Soviet Union, the former main enemy of National Socialism. He describes “new order of ethnographic relations” as the “most important task,” which is to be created through the resettlement of minorities and “eliminate at least some of the material for European conflict.”

Under these blows their State [Poland] has crumbled to pieces in a few weeks and is now swept from the earth. One of the most senseless deeds perpetrated at Versailles is thus a thing of the past.

If this step on Germany’s part has resulted in a community of interests with Russia, that is due not only to the similarity of the problems affecting the two States, but also to that of the conclusions which both States had arrived at with regard to their future relationship.

But one thing is certain: from the moment when the two States mutually agreed to respect each other’s distinctive regime and principles, every reason for any mutually hostile attitude had disappeared.

For many years imaginary aims were attributed to Germany’s foreign policy which at best might be taken to have arisen in the mind of a schoolboy.

At a moment when Germany is struggling to consolidate her own living space, which only consists of a few hundred thousand square kilometers, insolent journalists in countries which rule over 40,000,000 square kilometers state Germany is aspiring to world domination!

German-Russian agreements should prove immensely comforting to these worried sponsors of universal liberty, for do they not show most emphatically that their assertions as to Germany’s aiming at domination of the Urals, the Ukraine, Rumania, etcetera, are only excrescences of their own unhealthy war-lord fantasy?

In one respect it is true Germany’s decision is irrevocable, namely in her intention to see peaceful, stable and thus tolerable conditions introduced on her eastern frontiers; also it is precisely here that Germany’s interests and desires correspond entirely with those of the Soviet Union. The two States are resolved to prevent problematic conditions arising between them which contain germs of internal unrest and thus also of external disorder and which might perhaps in any way unfavorable affect the relationship of these two great States with one another.

Germany and the Soviet Union have therefore clearly defined the boundaries of their own spheres of interest with the intention of being singly responsible for law and order and preventing everything which might cause injury to the other partner.

The aims and tasks which emerge from the collapse of the Polish State are, in so far as the German sphere of interest is concerned, roughly as follows:

1. Demarcation of the boundary for the Reich, which will do justice to historical, ethnographical, and economic facts.
2. Pacification of the whole territory by restoring a tolerable measure of peace and order.
3. Absolute guarantees of security not only as far as Reich territory is concerned but for the entire sphere of interest.
4. Reestablishment and reorganization of economic life and of trade and transport, involving development of culture and civilization.
5. As the most important task, however, to establish a new order of ethnographic conditions, that is to say, resettlement of nationalities in such a manner that the process ultimately results in the obtaining of better dividing lines than is the case at present. In this sense, however, it is not a case of the problem being restricted to this particular sphere, but of a task with far wider implications, for the east and south of Europe are to a large extent filled with splinters of the German nationality, whose existence they cannot maintain.

In their very existence lie the reason and cause for continual international disturbances. In this age of the principle of nationalities and of racial ideals, it is utopian to believe that members of a highly developed people can be assimilated without trouble.

It is therefore essential for a far-sighted ordering of the life of Europe that a resettlement should be undertaken here so as to remove at least part of the material for European conflict. Germany and the Union of Soviet Republics have come to an agreement to support each other in this matter.

The German Government will, therefore, never allow the residual Polish State of the future to become in any sense a disturbing factor for the Reich itself and still less a source of disturbance between the German Reich and Soviet Russia.

What then are the aims of the Reich Government as regards the adjustment of conditions within the territory to the west of the German-Soviet line of demarcation which has been recognized as Germany’s sphere of influence?

First, the creation of a Reich frontier which, as has already been emphasized, shall be in accordance with existing historical, ethnographical, and economic conditions.

Second, the disposition of the entire living space according to the various nationalities; that is to say, the solution of the problems affecting the minorities which concern not only this area but nearly all the States in the southeast of Europe.

Third, in this connection: An attempt to reach a solution and settlement of the Jewish problem.

Fourth, reconstruction of transport facilities and economic life in the interest of all those living in this area.

Fifth, a guarantee for the security of this entire territory, and sixth, formation of a Polish State so constituted and governed as to prevent its becoming once again either a hotbed of anti-German activity or a center of intrigue against Germany and Russia.

NS-Propaganda Map on the “Resettlement” of “Ethnic Germans” (January 1941) 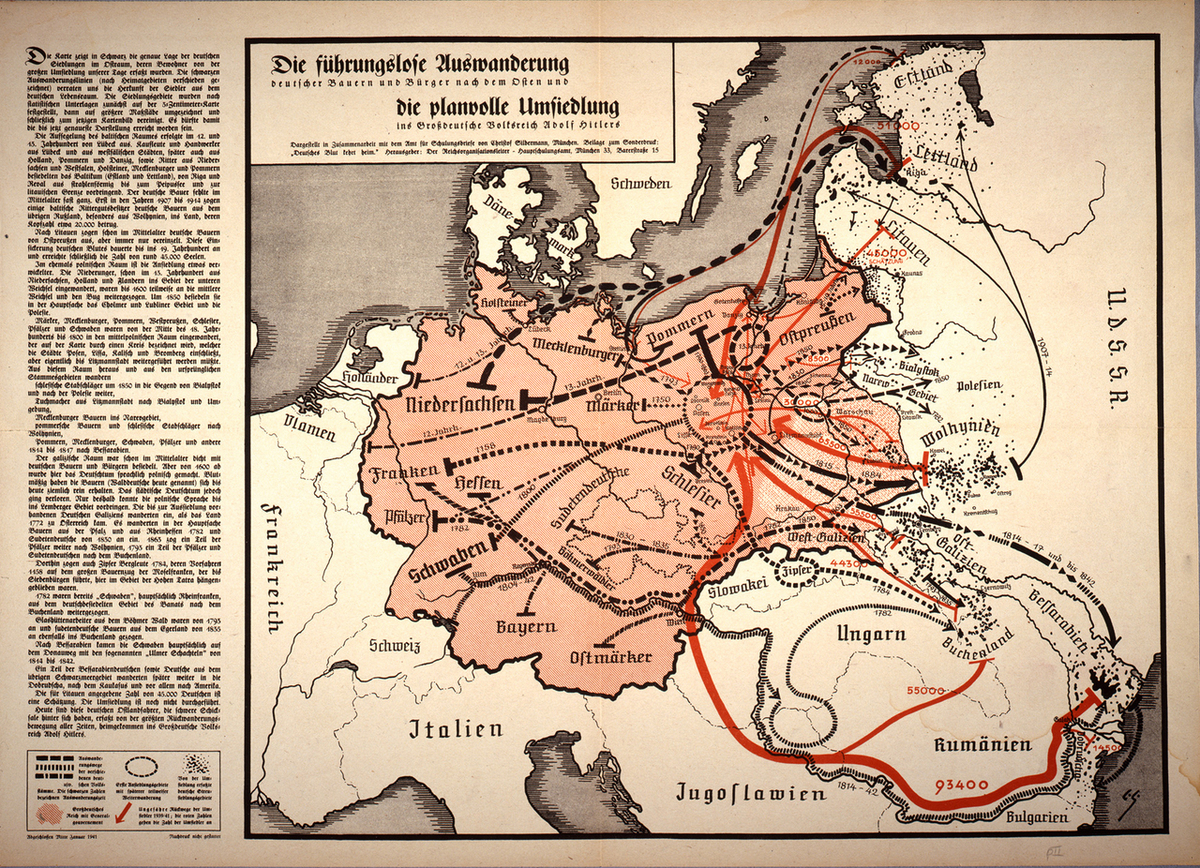 This map shows in black the exact location of the German settlements in the eastern region whose inhabitants have been caught up in the great resettlement of our days. The black emigration lines (drawn differently according to homeland areas) tell us the origin of the settlers from the German Lebensraum. The settlement areas were first determined according to statistical documents on a 3-centimeter map, then redrawn on larger scales and finally united to the present map image. This is probably the most accurate representation to date.
The exploration of the Baltic area by ship took place in the 12th and 13th century from Lübeck. Merchants and craftsmen from Lübeck and Westphalian cities, later also from Holland, Pomerania and Gdansk, as well as knights from Lower Saxony and Westphalia, Holsteiners, Mecklenburgers and Pomeranians settled in the Baltic States (Estonia and Latvia), moving outward from Riga and Reval to Lake Peipus and the Lithuanian border. The German peasant was almost completely absent here in the Middle Ages. It was only in the years 1907 to 1914 that some Baltic manor owners recruited German peasants from the rest of Russia, especially from Volhynia, whose headcount was about 20,000.
German peasants from East Prussia moved to Lithuania already in the Middle Ages, but always only in small numbers. This seeping in of German blood continued until the 19th century, eventually reaching the number of about 45,000 souls.
In the former Polish area the settlement is a bit more complicated. The Niederungers, who had migrated to the Lower Vistula region from Lower Saxony, Holland and Flanders as early as the 13th century, had partially moved on to the Middle Vistula and the Bug River by 1600. Around 1850 they settled mainly in the Cholm and Lublin area and Polesia.
Märkers, Mecklenburgers, Pomeranians, West Prussians, Silesians, Palatines and Swabians had migrated from the middle of the 18th century to 1800 to the central Polish area, which is indicated on the map by a circle that includes the cities of Posen, Lissa, Kalisch and Bromberg, but should actually continue to Litzmannstadt. From this area and from the original tribal areas:
Silesian forest workers migrated around 1850 to the area of Bialystok and to Polesia,
Clothiers from Litzmannstadt to Bialystok and its surroundings,
Mecklenburg peasants to the Narev region,
Pomeranian peasants and Silesian forest workers to Volhynia,
Pomeranians, Mecklenburgers, Swabians, Palatines and others to Bessarabia from 1814 to 1817.
The Galician region was densely populated with German peasants and citizens already in the Middle Ages. But from 1600 onwards the Germans were linguistically Polishized here. In terms of blood, the peasants (today called Forest Germans) have remained quite pure until today. In urban areas, however, Germanness was lost. Only because of this could the Polish language penetrate into the Lviv region. The Germans of Galicia who existed there before the resettlement had immigrated when the country became part of Austria in 1772. Mainly peasants from the Palatinate and Rheinhessen immigrated in 1782 and Sudeten Germans from 1830. In 1863 some of the Palatines moved on to Volhynia, in 1793 some of the Palatines and Sudeten Germans moved to Buchenland.
In 1784, Spiš miners, whose ancestors wound up here in the High Tatras in 1158 during the great peasant migration of the Moselle Franks leading all the way to Transylvania, also moved there.
In 1782, “Swabians,” mainly Rhine Franks, had already moved on from the German-settled area of the Banat to the Buchenland.
Glass workers from the Bohemian Forest had also moved to Buchenland from 1793, and Sudeten German peasants from Egerland from 1835.
The Swabians came to Bessarabia mainly via the Danube route on the so-called "Ulmer Schachteln" from 1814 to 1842.
A part of the Bessarabian Germans as well as Germans from the rest of the Black Sea region later migrated further to the Dobrudja, to the Caucasus and above all to America. The figure of 45,000 Germans given for Lithuania is an estimate. The resettlement has not yet been carried out. Today, these German Ostlanders, who have difficult fates behind them, are caught up in the greatest return migration of all times, and have come home to Adolf Hitler's Greater German Empire.
Legend (from left to right): Emigration routes of the various German tribes. The black numbers indicate emigration time.
First settlement areas with later partial onward migration.
German scattered settlement areas affected by resettlement.
Greater German Reich with General Government.
Approximate return routes of resettlers in 1939/41; the red numbers indicate the number of resettlers.