From August 24-30, 1973, Turkish autoworkers at the Ford plant in Cologne staged a strike and sit-in against the wishes of the German Alliance of Unions as well as their own umbrella union, IG-Metall. Since the 1990s, Ford Germany, with its Diversity Council founded in 1996 and its "Türkölsches Zusammenarbeiten" initiative, has been one of the companies in Germany that has explicitly redesigned its corporate culture according to the model of "diversity as strength."

Some Background to the Wildcat Strike at Ford

“We sat in the foreman’s office and hid under the desks as the Turks made their way through the warehouse.” Even now, fear seems to linger in this worker’s body. He was a witness to the most consequential strike among guest workers in the Federal Republic to date. For seven days, around 2,000 Turks took to the barricades at the Ford factory in Cologne. They stopped their work on the auto manufacturer’s conveyor belts.

The Turks’ wildcat strike began after the management fired 300 of their countrymen and women for returning late from vacation.

This layoff was, however, just the straw that broke the camel’s back. The angry men who blocked production day after day felt provoked by other unfair labor practices as well. They decried the work conditions, demanded higher compensation, and complained of discrimination by their German colleagues.

At Ford, what has been simmering just below the surface at many factories appears to have forced its way into the public eye for the first time. The guest workers, this new German proletariat, wanted something better. The fact that it happened here in Cologne is no coincidence. In this metropolis on the Rhine, the problems of guest workers have become evident in an intense way, in residential conditions as well as in the workplace.

Foreigners, primarily Turks, tend to live in prewar buildings from the 1870s between Ring Street and the railway tracks near the city center. Most Germans moved out of these buildings long ago; the noise of traffic comes in day and night. The sanitary facilities of these tenements are generally inadequate, and sunlight hardly makes its way into the backyards.

The Turks’ workplace appears much more inviting at first glance, but even there, one can sense their second-class social status. Nonetheless, the union representatives at Ford allege that “they are working at the same rate as us; they are receiving the same wage for the same work.” But in reality, the 12,000 Turks are a large, disadvantaged minority among the staff of 32,000 workers. The language barrier bars them from accessing better wages. As a rule, Turks do monotonous, dirty, and uncomfortable work – like removing screws in very hard-to-reach spaces – work that does not require a common language and understanding with one’s neighbor. With a little teamwork, the Germans and the few German-speaking Turks can make up to 2 marks more per hour.

A number of internal production-rate differences cement this inequity.

There are many difficult jobs that are simply not done by Germans anymore, jobs that have been entirely given over to foreigners. The productivity standards for those jobs are, without a doubt, guest-worker standards.

Unions and workers’ councils, which are supposed to represent the interest of all employees, are hardly able to provide assistance. In many ways, language difficulties stand in the way of trust and cooperation. The union functionaries do not speak Turkish. The management’s interpreters are often considered extensions of the power of the management, and justifiably so.

Last year, it appeared as though no Turk would be able to remedy this lack of representation. Their countryman Mehmed Ozbăgcı was elected to the workers’ council staff. But what was the reaction of the workers’ council, which was run by an absolute IG-Metall majority? It refused to accept Ozbăgcı into the tight circle of at-large members. Ernst L”uck, the chair of the workers’ council, complained that “the man did not know German and did not even have a copy of the Works Constitution Act.”

Since then, Ozbăgcı has had to do the work of a workers’ council member as well as his work on the assembly line. Turkish colleagues support him financially so that he can sustain this double duty. Along with Ozbăgcı, four other Turks and an Italian, all IG-Metall members, have become workers’ council members. The percentage of guest workers on the workers’ council is now 12.7 percent, whereas their share of the overall company workforce is 53.1 percent. These numbers disprove the claim that guest workers have equal representation in the Cologne Ford factory.

The layoff of 300 Turks then turned simmering unrest into open rebellion. Unlike for their German colleagues, for many of them vacation does not mean a recreational break. They often have to travel days to reach their home villages to settle rent claims and debts, and once there, they frequently encounter tumultuous family issues such as inheritance disputes. But neither the workers’ council nor their German colleagues have much interest in or understanding of such situations. One German worker says, “There are lots of them who overdraw their vacation days until they run out of money and don’t have anything left to eat.”

Meanwhile, Turks feel that they are being treated unfairly. They fear having to overcompensate for the absence of those who have been fired from the assembly line, where they claim the pace is too fast and allows for too few breaks. The strike could be avoided no longer.

Then, who else took over the coordination of the strike but leftist extremists. It remains unclear whether they were intentionally planted in the factory like the high school graduate Dieter Heinert, who became known through the Brechnjew unrest in Bonn and of whom it is said that he specifically learned Turkish before he began his job as an unskilled laborer at the Ford plant. It has been documented, however, that the eloquent Turkish agitator Sulaiman Baba Targün (30) began work at the factory only four days before the strike broke out.

The strikers’ demands – a cost-of-living bonus and a 13 percent wage increase, long-time goals of the workers’ council – generated solidarity among many German workers with their Turkish colleagues. But the solidarity was soon overshadowed by misunderstanding and fear – and was finally crowded out by enmity and hate.

This strike was not a German strike. It fostered resentment about the foreigners’ rabble-rousing. “You should just send all of them away,” sais many; such were the most harmless comments on this Turkish impertinence. In a mass counterdemonstration condemning the action, the German employees defeated the foreigners’ strike. When police commandos arrested the agitators, vigilantes moved in, saying “One should just give them a good beating; then it will be all over with.”

The ultimate gain of the strike – a cost-of-living bonus – benefited the German employees as well. As for the Turks, only a repeal of some layoffs was promised. The management and IG-Metall in Cologne declared they have learned a lesson from the strike and are going to take a close look at their guest worker policies. It is high time for it.

Wildcat Strike at the Ford Plant in Cologne (September 1973) 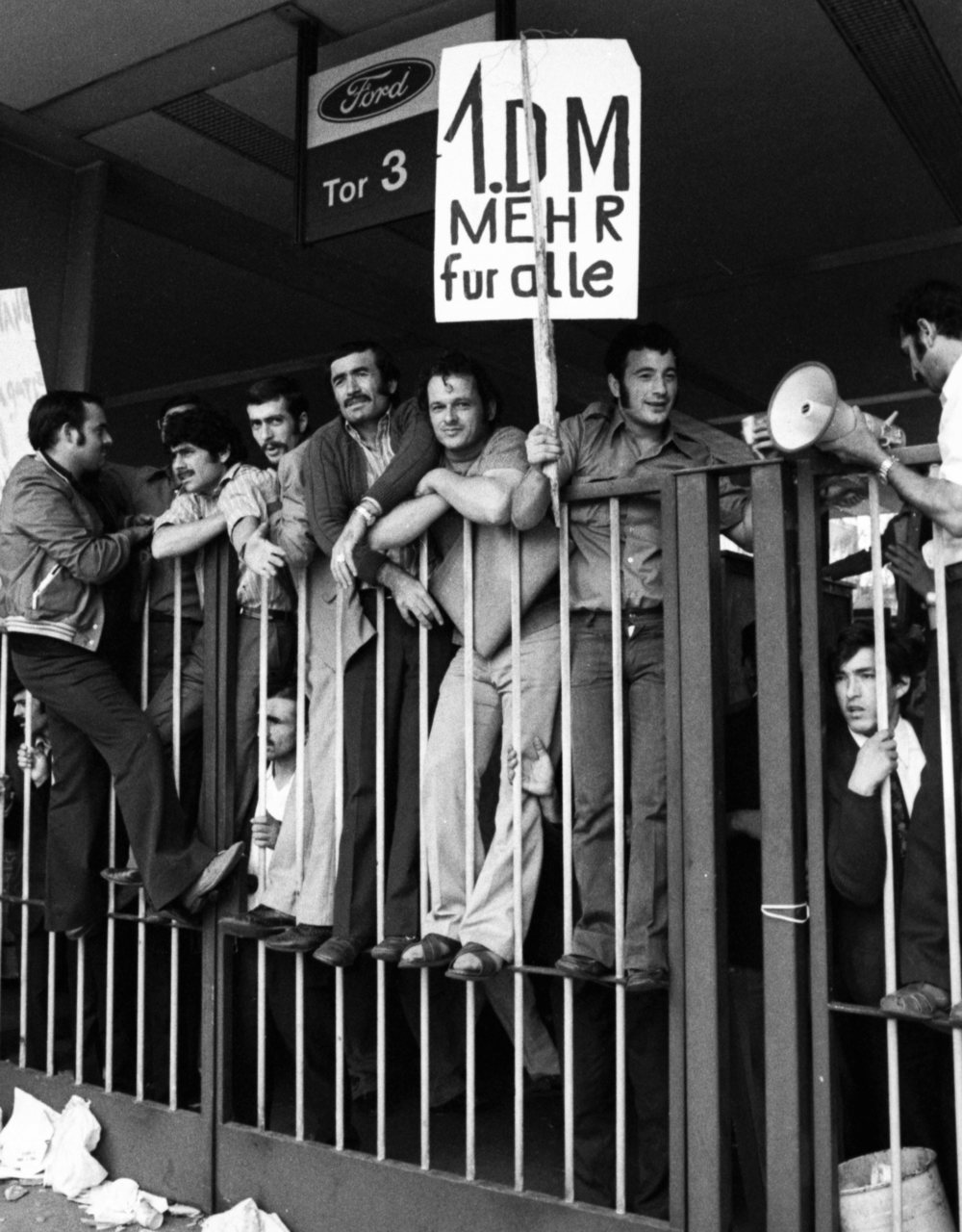 Friedrich K. Kurylo, “The Turks Rehearsed the Uprising” (September 7, 1973), published in: German History Intersections, <https://germanhistory-intersections.org/en/migration/ghis:document-86> [August 11, 2022].
< “How the Turkish Worker Should Behave and Defend His Character in a Foreign Country” (1963)
Female Polish Workers in the GDR (1974) >