We, Frederick William, by Grace of God Margrave of Brandenburg, High Chamberlain of the Holy Roman Empire and Elector, Duke in Prussia, Magdeburg, Jülich, Cleves, Berg, Stettin, Pomerania, of the Cassubians and Wends, also in Silesia, of Crossen and Jägerndorf, Burgrave of Nuremberg, Prince of Halberstadt, Minden, and Camin, Count of Hohenzollern, the Mark and Ravensberg, Lord of Ravenstein and the Land of Lauenburg and Bülow, etc.,

Do hereby proclaim and make known to all and sundry that since the cruel persecutions and rigorous ill-treatment in which Our co-religionists of the Evangelical-Reformed faith have for some time past been subjected in the Kingdom of France, have caused many families to remove themselves and to betake themselves out of the said Kingdom into other lands, We now, out of the righteous sympathy which We must in justice feel toward these, Our co-religionists, who are oppressed and assailed for the sake of the Holy Gospel and its pure doctrine, have been moved graciously to offer them through this Edict signed by Our own hand a secure and free refuge in all Our Lands and Provinces, and further to announce to them what justice, liberties and prerogatives We are most graciously minded to concede to them, in order to relieve in some measure and make more tolerable the great need and tribulation with which it has pleased the Almighty, according to His only wise and inscrutable counsel, to afflict so important a part of His Church.

1. In order to make it easier for all those who may resolve to settle in Our Lands to reach and move there, We have commanded Our Envoy Extraordinary to the States General of the United Netherlands, von Diest, and Our Commissioner in Amsterdam, Romswinckel, to procure for all Frenchmen of the religion reporting to them ships and other necessaries, and to transport them and theirs from the Netherlands to Hamburg, where Our Aulic Councillor and Resident in the Circle of Lower Saxony, von Gericke, will give them all further facilities and help needed by them, that they may be conveyed to the place in which they have chosen to establish themselves in Our Lands.

2. In respect of those who wish to proceed to Our Lands via Sedan, from Champagne, Lorraine, Burgundy, and the southern provinces of France, without going through the Netherlands– such persons are to travel to Frankfurt am Main and there to report to Our Councillor and Resident, Merian, or to Our agent Lely in Cologne on the Rhine, and We have instructed both to provide them with money, passports, and ships and to send them down the Rhine to Our Duchy of Cleves, where Our Government will see to it that they are either established in Our Lands of Cleves and Mark or, if they wish to go further into others of Our Provinces, are provided with all necessaries therefor.

3. Since Our Lands are not only well and amply endowed with all things necessary to support life, but also very well-suited to the establishment of all kinds of manufactures and trade and traffic by land and water, We permit, indeed, to those settling therein free choice to establish themselves where it is most convenient for their profession and way of living, in Our Duchy of Cleves, in the Counties of Mark and Ravensberg, the Principalities of Halberstadt and Minden, or in the Duchy of Magdeburg, the Electoral Mark of Brandenburg and the Duchies of Pomerania and Prussia; but since We consider that in Our said Electoral Mark of Brandenburg the towns of Stendal, Werben, Rathenow, Brandenburg, and Frankfurt, and in the Duchy of Magdeburg the cities of Magdeburg, Halle, and Calbe, and in Prussia the town of Königsberg, will be the most convenient for them, both because they can live there very cheaply and on account of the facilities they will find there for living and practicing a trade, We have made provision and do hereby announce Our command that so soon as any of the said Evangelical-Reformed Frenchmen arrive there, they are to be well received and helped in all possible ways to establish themselves. Whereby We leave it to their free choice to choose for their place of settlement any other place in Our Provinces outside the towns enumerated above, wherever they find it most convenient to practice their professions and trades.

4. The personal property which they bring with them, including merchandise and other wares, is to be totally exempt from any taxes, customs dues, licenses, or other imposts of any description, and not detained in any way.

5. And whereas the towns and villages in which numbers of the said Protestants will be settling and establishing themselves contain certain disrepaired, abandoned, and ruinous houses, whose owners have not the means to repair them and restore them to good condition, We do confer and assign the same in freehold to Our said French co-religionists, their children, and their children’s children, and also provide that the former proprietors shall be compensated to the value of the said houses, and the same shall be totally released and made free from all liens, mortgages, arrears of taxation, and all other similar debts. We further order that they be supplied gratis with timber, lime, and other materials necessary for the repair of the said houses and grant them six years’ exemption from all taxation, billeting, and other public charges of any description and further ordain that for the said six years the occupants shall not be required to pay any taxation except the normal excise tax on consumption.

6. We similarly provide that in towns and other places in which there are certain empty places and sites, these shall not only be assigned, with all gardens, fields, meadows, and pastures appertaining thereto, to Our said Protestant co-religionists of French nationality in perpetual freehold, but also that the same shall be totally released and liberated from all charges and servitudes attaching to them, and further, they are to be provided gratis with all materials required by them for the cultivation of these sites, and the new houses built by them and their inhabitants are not to be liable to any charges except the said excise, for the first ten years. And since We are also graciously minded to provide all possible facilities for the reception and establishment of the said people in Our Lands, We have had orders conveyed to the magistrates and other officials in these Our Provinces to hire certain houses in each town in which the said Frenchmen may be received on their arrival, and the rent thereof for them and their families is to be paid for four years, on condition, however, that they be required in due course to bring under cultivation the sites made available to them, as above.

7. As soon as these Our French co-religionists of the Evangelical-Reformed faith have settled in any town or village, they shall be admitted to the domiciliary rights and craft freedoms customary there, gratis and without payment of any fee; and shall be entitled to the benefits, rights, and privileges enjoyed by Our other, native, subjects, residing there. We also declare them totally exempt from the so-called droit d’aubaine and other similar charges commonly imposed on foreigners in other Kingdoms, Lands, and Republics and, in general, wish them to be regarded and treated on the same footing as Our own native subjects.

8. Not only are those who wish to establish manufacture of cloth, stuffs, hats, or other objects in which they are skilled to enjoy all necessary freedoms, privileges and facilities, but also provision is to be made for them to be assisted and helped as far as possible with money and anything else which they need to realize their intention.

9. Those who settle in the country and wish to maintain themselves by agriculture are to be given a certain plot of land to bring under cultivation and provided with whatever they need to establish themselves initially, and in other respects helped as has previously been done with sundry Swiss families who have entered Our Land and settled there.

10. In respect of jurisdiction and settlement of suits and disputes arising between the said French families, We graciously consent and hereby concede that in towns where there are several French families they shall elect one of their own number who shall be competent to bring about amicable settlements of such differences, in summary fashion. But should such disputes arise between Germans on the one side and Frenchmen on the other, they shall be investigated jointly and in common by the magistrate of each locality and by the person chosen by the French to be their spokesman, and a summary judgment delivered, which shall also be done when the differences arising between Frenchmen among themselves cannot be settled by the above procedure of conciliation.

11. Our said French co-religionists in each town shall be provided with their own pastor, and Divine Service shall be conducted in the French language with the same rites and ceremonies as have hitherto been customary in the Evangelical-Reformed Churches in France.

12. And just as those French nobles who have previously sought admission to Our protection and Our service enjoy the same honors, dignities, and prerogatives as Our other noble subjects, and We have also in fact employed sundry of them in the highest offices and posts of honor at Our Court, and also in Our armed forces, so We graciously consent to confer the same grace and promotion on French noblemen settling in Our Land in the future, and to admit them to all charges, services, and dignities for which they are qualified; similarly, if they buy and acquire fiefs and other noble estates in Our Lands, they shall also in like manner enjoy the rights, privileges, freedoms and immunities enjoyed by Our subjects born.

13. All rights, privileges and other benefits mentioned in the above points and articles accrue not only to those who arrive hereafter in Our Lands, but also to those who escaped from France before publication of this Edict and took refuge in these Our Lands, before previous religious persecutions; but those who are devoted to the Roman Catholic faith have in no way to presume to like favor.

14. We propose to set up Commissions in each and every one of Our Lands and Provinces to which the said Frenchmen may apply both on their arrival and afterward, and receive from them counsel and assistance; whereby We most graciously and earnestly enjoin all Our Governors, Governments, and other Servants and Commanders in towns and in the country, in all Our Provinces, through this public Edict and also through special orders, to take Our said French Evangelical-Reformed co-religionists, all and sundry, as many of them as shall come to Our country, under their special care and protection, to maintain and keep them expressly in all the Privileges hereby graciously conceded them, and in no wise to suffer that the least harm, injustice, or vexation be done them, but rather that they be shown all help, friendship, and good treatment. We have signed this Edict for record with Our own hand and have had Our Seal of Grace imprinted on it.

[Please note: this edict was issued in both German and French.]

A Family of Emigrants is Welcomed by the Elector of Brandenburg (c. 1732) 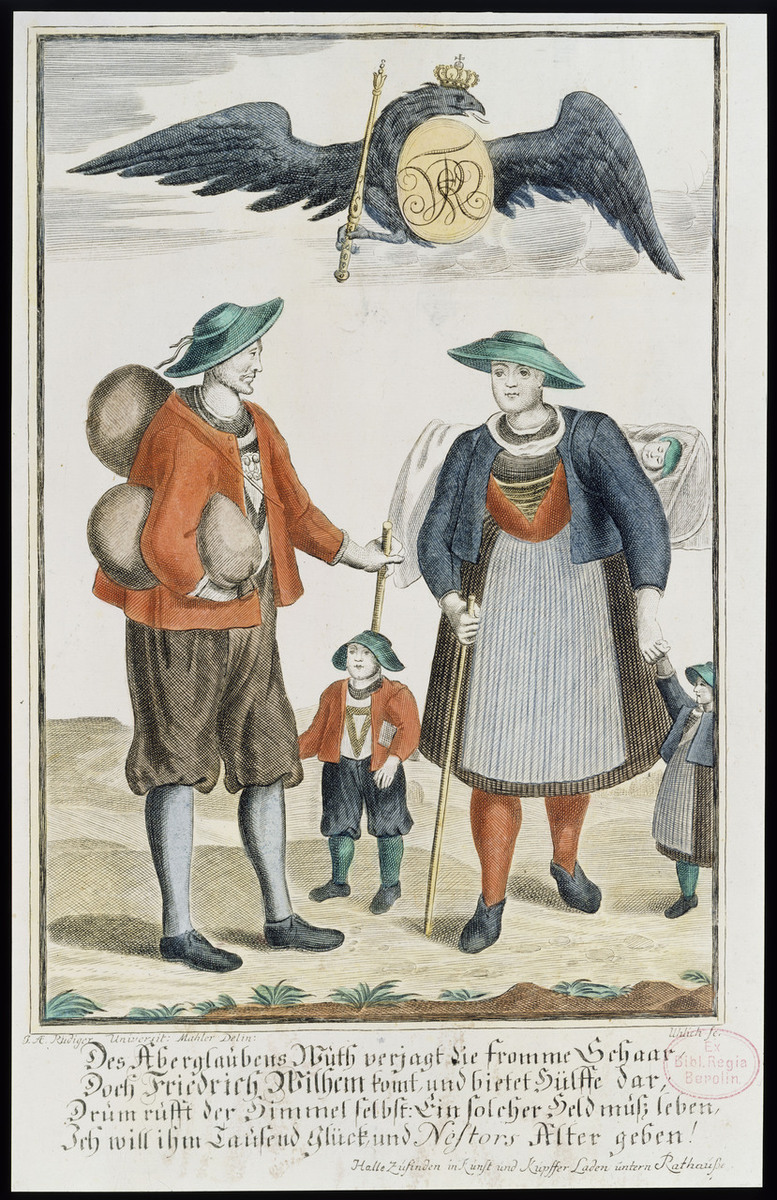 The Edict of Potsdam (October 29, 1685), published in: German History Intersections, <https://germanhistory-intersections.org/en/migration/ghis:document-34> [January 29, 2023].
Stefano Jacini, On the Emigration of Italians to Germany (1915) >